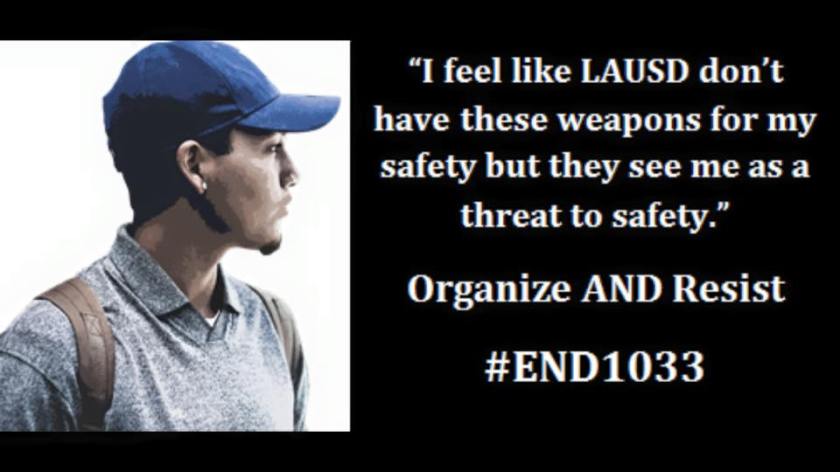 On Tuesday, protesters disrupted the Los Angeles Unified School District’s Committee of the Whole meeting, with demands concerning policing in schools and use of military surplus equipment. Los Angeles is among schools systems around the country which had obtained military equipment – including grenade launchers, armored vehicles, rifles, automatic weapons and other items – under the Department of Defense’s 1033 program. (Media links below)

DoD gear and weapons had been provided, free of charge, to more than 20 school districts in eight states—California, Florida, Georgia, Kansas, Michigan, Nevada, Texas, and Utah – plus 102 colleges and universities. In addition, where school districts do not have their own police force, local police also received military surplus. Then, last May, the White House issued an executive order regulating use of military equipment by local and school police departments. (See links below.)

Police forces solely serving K-12 schools were barred from obtaining additional equipment under the 1033 program. The order did not say that such equipment already in possession of school systems would have to be returned.

Tuesday’s protest led by the Labor/Community Strategy Center, followed 18 months of activism asking for return of the military equipment, proof of this action, and a public inventory of existing weapons.

Back in 2014, LA’s School Police force re-evaluated its military weapons. The chief determined that 40mm less-lethal weapons – otherwise known as “grenade launchers” – were “not essential life-saving items within the scope, duties and mission of the Los Angeles School Police Department,” and returned them. Rifles and a Mine-Resistant Ambush Protected (MRAP) vehicle, however, were declared “life-saving” items and kept until more recently. In an early February letter, the chief says that all equipment obtained through the DoD’s 1033 program has been returned.

Protesters continue to demand proof and an inventory of all school weapons. They also want an apology to students for arming against them and a 50% reduction in the school police force and its weapons.

Students had previously demanded that the military equipment be destroyed. But the school police chief declared that they had no legal authority to destroy DoD property.

The executive order does not prohibit law enforcement agencies that do not exclusively serve schools from obtaining equipment through the 1033 program. Moreover, the order specifically states that local agencies can obtain “controlled” military-type weapons – including armored vehicles and rifles — through other means.

Grenade launchers, however, have been put on a “prohibited” list, with the explanation that, although these can be used to “launch tear gas and other nonexplosive and less‐than‐lethal projectiles, their use and misuse can be detrimental to maintaining public trust in law enforcement.”

More on Guns in Academic Life

I was not able to determine how many of the other school districts and colleges still have DoD gear and weapons. Meanwhile, at least one Texas university is warning faculty to avoid sensitive topics in their classes this coming fall, when a new state law allowing students to carry guns on campus goes into effect.

On the Executive Order