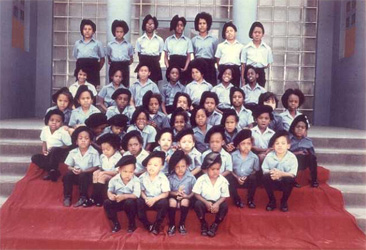 The Black Panther Party for Self-Defense has been a popular topic this week. Over 100 million viewers saw the SuperBowl’s halftime performance, featuring dancers costumed to evoke the party, and many more have seen news or commentary mentioning the Black Panthers since then. So this seems a good week to look briefly at the party’s education program.

“Education” appears twice in the 10-point program of the Black Panther Party, founded in 1966. Education – along with land, bread, housing, clothing, justice, and peace – is listed as a party “want” and a matter for self-determination. A separate point states:

As the party evolved – first in Oakland, California, and then in other cities – education for children and adults was central. One of the most famous Black Panther efforts was a free breakfast program, pre-dating federally-funded school meals. In addition to lessons during meals, Liberation Schools offered after school and summer programming designed to “guide youth in their search for revolutionary truth.”

Ericka Huggins, who directed Oakland Community School for eight years, describes the school’s vision to help children “use their education as a stepping-stone to become world changers,” to appreciate every child for their “innate wisdom and unique talents,” to use the world as a classroom, and to teach children “how, not what, to think.”

Elaine Brown, who led the party from 1974-77, points out that education programs were included among the “survival programs,” of the Black Panthers, an integral aspect of party philosophy.

Huey Newton likened survival programs to a raft during a flood. Such emergency services, he said, “do not change social conditions, but they are life-saving vehicles until conditions change.” (from Huey P. Newton, To Die for the People)

A revolutionary program is one set forth…by those who want to change the existing system to a better system. A reform program is set up by the existing exploitative system as an appeasing handout to fool the people and keep them quiet.
— from Bobby Seale, Seize the Time: The Story of the Black Panther Party and Huey P. Newton

This revolutionary core of Black Panther work is too often overlooked or misunderstood in the re-telling, according to Brown. Stanley Nelson’s documentary, “The Black Panthers: Vanguard of the Revolution,” fails in this way, she argues. And, as it happens, this film is scheduled to air on PBS, February 16, less than ten days after the SuperBowl performance drew so much attention to its subject.

Brown so strongly objected to Nelson’s film that she tried to have her interview removed from it. (Elaine Brown’s remarks.)

MORE:
Black Panthers: Vanguard of the Revolution (film),
the PBS showing (2/16) and Discussion Guide
“BPP Handout”, from Putting the Movement Back into Civil Rights Teaching.

In closing, the SuperBowl performance, with its chorus of female dancers, provides a useful visual. For 50 years armed men served as the quintessential image of the Black Panthers, with Angela Davis maybe somewhere off to the side. The group was originally all-male and continued to struggle around gender issues. However, as historian Clayborne Carson says in Nelson’s documentary, the movement included more than a handful of famous women: By the end of the 1960s, “women comprised the majority of “rank and file” members.” Sunday’s chorus of women dancing Beyoncé may help shift the predominantly masculine image of the movement….

…And perhaps, in the long-run, the lyrics to which they’re dancing will prompt some useful discussion about that decadent American society and how the Black Panthers hoped education would expose it.

Beyoncés dancers in black berets at #SB50 paying homage to the Black Panthers 50 years after their #formation in '66 pic.twitter.com/YXpzBkkm6s

The Education Town Hall BUS is a monthly program
organized by BadAss Teachers, United Opt Out, and SOS March.
The BUS program regularly airs on the 4th Thursday of each month.