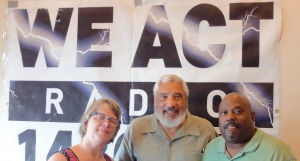 Rev. Graylan Scott Hagler, candidate for DC Council At-Large, told the Education Town Hall on 8/21 that, “hype is that somehow ‘reform’ is advancing” DC’s public schools. The reality, since mayoral control was initiated in the District, has been something else, he argues. Test result improvements are largely among white students, while black students lag farther behind. In fact, he calculates, if white students “plateaued right now, it would still take black students 132 years to catch up at the current rate of improvement.”

Hagler decries the lack of evaluation of Mayoral Control of DC schools and the privatization that follows the opening of charter schools.

His vision for education calls for collaborative arrangements between principals, schools and communities. “If any school comes with a top-down, cookie-cutter model of education, without local collaboration, we don’t you need you in DC!”