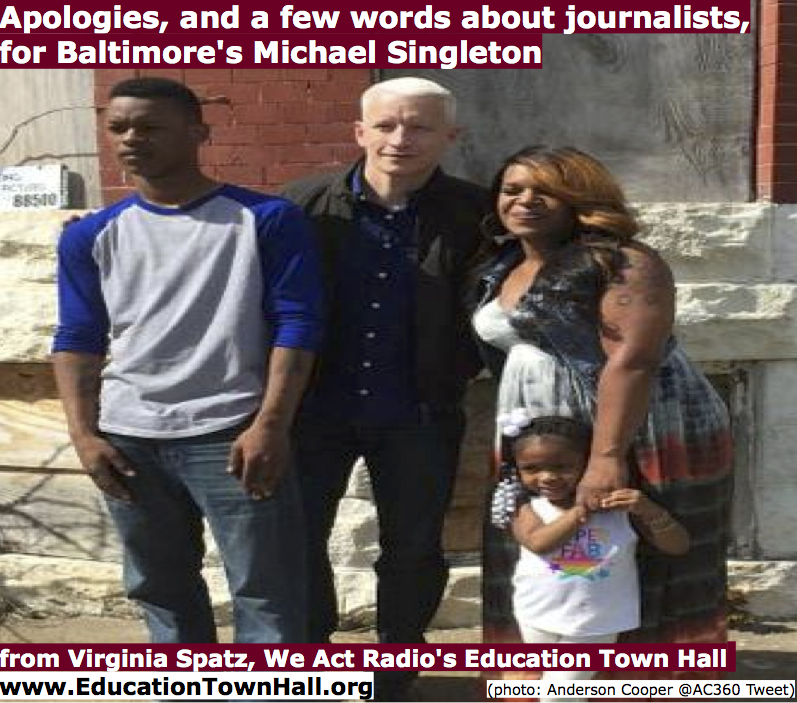 A Mother, A Son, and A Rock

I begin my report this week by refreshing memories on a bit of news – or perhaps, more accurately, public theater – that emerged in the wake of Freddie Gray’s death at the hands of Baltimore Police.

16-year-old Michael Singleton, a Baltimore high school student, told Whoopi Goldberg on The View: “A lot of my friends have been beaten, killed…by police….I went down there to fight for what I stand for — my Black people.”

His statement was greeted by thunderous silence from the panel and audience.

Singleton is the young man caught on tape being slugged in the face by his mother, who later told news outlets that she was “in a rage” upon seeing that he had defied her to join a group throwing rocks at police. Toya Graham was then heralded “mom of the year” by a number of media outlets, and she and Singleton were interviewed on national programs in subsequent days.

No one on The View offered condolences to the 16-year-old who had just expressed such grievous loss. Not one second of outrage emerged as he related that agents of the state, meant to protect Singleton and his friends, terrorized them instead.

Charlie Rose, who also interviewed the pair, did respond to Singleton: “So yours was an act of protest because of what happened to your friend.” That was a record degree of empathy for Singleton, as far as I saw, in the national interviews he endured with his mother.

It was Graham who was greeted with hearty applause as she described pummeling her son and declared “throwing rocks at the police is not going to bring [Freddie Gray] back.” Whoopi Goldberg thanked her for demonstrating that “there are caring parents out there.”

Many sources, including Graham herself, spoke about a black mother's fear for her son. (See, e.g., Robin Boylorn, "A Black Mother’s Love (or What Love Looks Like in Public).”)

Some print opinions point out that “Praising Graham distracts from a hard truth.” Stacey Patton wrote in the Washington Post, for example:

It doesn’t matter how black children behave – whether they throw rocks at the police, burn a CVS, join gangs, walk home from the store with candy in their pocket, listen to rap music in a car with friends, play with a toy gun in a park, or simply make eye contact with a police officer – they risk being killed and blamed for their own deaths because black youths are rarely viewed as innocent or worthy of protection.

This celebration of Graham reflects a belief that black youths are inherently problematic, criminal and out of control….all we need is an angry black mom to beat the “thug” out of an angry young man – and everything will be fine.
— Stacey Patton, in the Post

“What is so disturbing,” Patton concludes, “is that white supremacy is let off the hook.”

Patton is right, of course – about the basic issue of white supremacy, about the way black youth are viewed as problematic. Still, she, like many who commented on the film clip of mother and son, talks around Michael Singleton.

And so I want to say something directly to him…

I do not represent any group of journalists, Mr. Singleton, but I believe we all owe you an apology. You came prepared, in the midst of upheaval in your hometown, with a clear statement of your experience and motivations, and not one journalist took the time to explore those with you. I am sorry national media did not share your story, apart from your mother’s, in any depth. Perhaps, if you haven’t given up on us entirely, you will agree to tell your story to someone prepared to listen.

I do not represent any collective of older folks or parents, but I believe we all owe you an apologize, too. It is exceedingly hard for grown people to look straight at the lives of many young people in this country. Some of us are in denial or simply cannot see what is in front of us. Others are so broken-hearted and ashamed of what we’ve left you to manage — on your streets and in your schools — that we’ll look anywhere but right at you when you tell us that your friends, young people whom it is our responsibility to nourish and protect, were seriously harmed on our watch.

So, this is just to let you know that some of us heard you, Mr. Singleton. And just as I do not represent all parents or all older people or all journalists, you should not be expected to represent anyone but yourself.

And let me close with a bit of background about journalists:

We’re usually in a hurry, generally behind impossible deadlines, and almost always less informed than we would like.

Ideal journalism, in my opinion, means listening to people and exploring what is what before deciding on a story. But that’s not how it always works. Oftentimes, a news outlet has chosen the story it is telling before it seeks collaborating evidence and quotes.

It’s hard for someone being interviewed to know how their words will be used – and sometimes the reporters themselves don’t know. But keep in mind that you don’t have to let others define you:

You don’t have to be the angry teen or the voice of young Baltimore.
Or the contrite son.
Or the defiant one.
Just be yourself.
And keep telling your own story.


The Education Town Hall broadcasts from Historic Anacostia in Washington, DC, Thursdays
at 11:00 a.m. Eastern on We Act Radio.
Listen live via TuneIn.
Shows are archived for convenient listening shortly after broadcast.