“I create art that is informative and that is educational and that is inspiring to young people,” Bomani Darel Armah told Education Town Hall host, Thomas Byrd. Armah uses hip-hop, poetry and multi-media as educational tools with students, from kindergarten through graduate school. He says he is “not a rapper, but a poet in hip-hop style” and works to empower young people to become more critical thinkers and embrace their creative side while learning life skills. 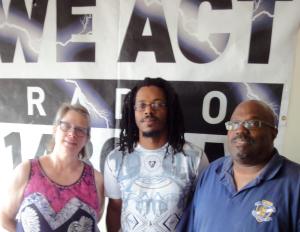 Armah’s arts-integration workshops bring him into many school systems in the DC-Maryland-Virginia area. Through this work, he sees many problems with the school systems, particularly with the goals teachers are expected to meet:

The goals that our politicians are giving [teachers] aren’t goals that really set up our children, our young people, to be successful in the world…

Change the mission of these great teachers, and we could do a better job for everyone.

Is Common Core the problem? It’s not the standards themselves that are problematic, Armah argues. “It’s the timeline.”

It’s the idea that you should be able to tell where a kid should have progressed to by when they were born.

[Common Core timelines] don’t give you an opportunity to calculate what students did learn.

Education is, or should be, “about reaching kids where they are.” This idea inspires Armah’s work inside public schools. The same idea, along with Malcolm X’s teaching that “only a fool lets his enemies education his children,” also led to homeschooling for Armah’s own children.

Armah works through a number of local institutions, including the National Cathedral, Martha’s Table, Busboys and Poets, Words Beats & Life, and Young Audiences of Maryland. He has also worked with the Bavubuka Foundation in Uganda.

Listen to the Education Town Hall live via TuneIn ,

Shows are archived shortly after air-time

for listening at your convenience.