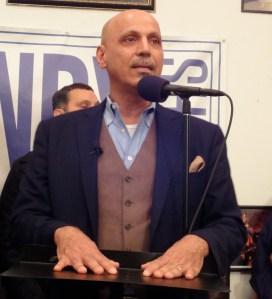 When Andy Shallal announced his candidacy for DC mayor this morning, the first question he faced was about education.

“One our biggest problems is lack of participation. Young people have checked out,” Shallal said, in response to a question from the Education Town Hall. “They are not inspired. That’s why they stay home.”

Changing the voting age to 17 would make “the last year of high school a full course in civics,” Shallal suggested. Students must know “why it’s important to be part of a democracy,” he added, concluding, “I came from a dictatorship.”

Shallal, owner of several businesses, also spoke of meeting potential employees who are “simply not prepared for life.” He proposes a program, beginning in middle school, to cover such “life” topics as managing anger, dealing with bullying, being a friend, living with differences.”

“I am not big on the testing thing, I have to tell you,” Shallal concluded. “It dumbs down our curriculum….Of course we want the best teachers, but we have to have another matrix.”

In response to a later question, the mayoral candidate spoke about the importance of arts. He noted that art and music are often the first cut in schools but are “as important as math and science.” Shallal proposes 1% of ALL budgets — not just a siloed council for the arts — dedicated to the arts.

Look for more on Shallal’s education positions, as well as more from other DC mayoral candidates, via the Education Town Hall.

At today’s event: Kristen Arant (DrumLady) and Akoma Drummers open the event at Ben’s Chili Bowl on U Street. Bomani D. Armah presents hip-hop poem, “Make DC A City for All” prior to Shallal’s announcement. Rock Newman introduced the candidate. 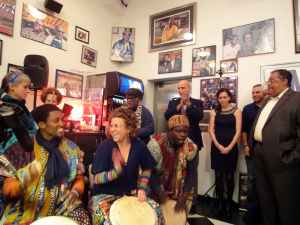 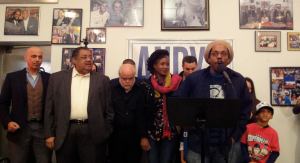